I recently read two travel-related autobiographies which are described as fascinating: “The Islander, My Life in Music and Beyond”, by Chris Blackwell with Paul Morley (Gallery Books, 2022), and “Way Out There, Adventures of a Wilderness Trekker” by J. Robert Harris (Mountaineers Books, 2017). In the spirit of full disclosure, I must acknowledge that I know both men, and I also acknowledge that knowing them brought a level of apprehension to sitting down with the books. I’ve read books written by people I know that were so disappointing that it changed my overall impressions of them. 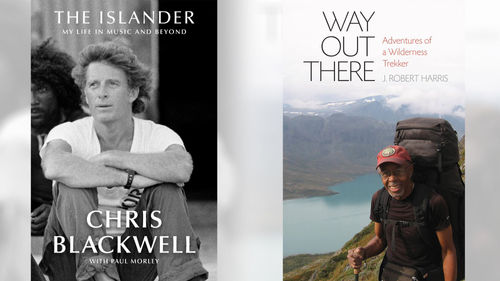 “The Islander, My Life in Music and Beyond”, by Chris Blackwell with Paul Morley, and “Way Out There, Adventures of a Wilderness Trekker” by J. Robert Harris. Photo credit: Courtesy of Gallery Books and Mountaineers Books

This was not the case with either. What makes the two so compelling is that each goes far beyond everyday descriptions of their lives and accomplishments and dedicates equal time to recreating the outside influences that have shaped who they are. Blackwell is not using Jamaica simply as the backdrop of his formative years, but reveals the 360-degree environment that, in a very real sense, created it. Harris’s ideas about the places he passes through are deeply linked to the places themselves, which he describes wonderfully.

Providing this context makes these books much more than self-portraits or travelogues. Blackwell is careful not only to reconstruct the Jamaica he grew up in, but also the popular cultural scene of 1960s London and the portraits of little-known but highly influential people he encountered along the way. Harris also provides fascinating, and sometimes obscure, historical and geological information about the vistas he travels, the people he meets, and the attractions I had no idea existed.

In regards to “The Islander”, I must mention at the outset that although Blackwell was perhaps more responsible for the rebirth of South Beach in Miami than any individual and went on to build a collection of accommodations unique to Jamaica, the book is over 90% about his musical career. It devotes only one chapter to hospitality, grouped with the launch of a brand of rum and other miscellaneous.

But the book will nonetheless be of interest to anyone with an interest in travel and music. Blackwell’s vision for hotels was clearly shaped by his upbringing in Jamaica and his experiences with Island Records, and he comes across as an observant world traveler.

As far as his personal life is concerned, he is discreet and leaves only a handful of clues: with the exception of his last wife, Mary Vinson, the reader knows of his previous marriages only with occasional and after-the-fact references. to ex-wives. . It’s not “Life” by Keith Richards (2010, Little, Brown & Co.).

But overall, his written narrative voice accurately reflects his real-life storytelling. If my experience playing “The Islander” is typical, one of the beneficiaries of the post will be Spotify: its musical knowledge is so deep and its descriptions of musicians so vivid that I continually check the songs and artists it puts on. in light.

Harris, who in the mid-1970s started JRH Marketing Services, the oldest African-American-owned research and consulting firm, is a lone backpacker who travels without a support team and has completed more than 40 two-week hikes. in remote areas. Although solo, he is never completely alone in the wild, and he describes the wildlife he encounters as well as the hikers he encountered along the way and is aware of the pioneers who explored the areas before him. He gives credit where it’s due and devotes a chapter to “the friendliness of strangers”.

Although he usually travels alone, a neighbor he sometimes hikes with convinced him to consider starting a wilderness guiding business. The idea went so far as to create a logo, stationery, business cards and a brochure, and they became licensed guides, but Harris, who was skeptical of the idea, writes: “Fortunately, we never had to take anyone into the backcountry.

And wildlife gets its due, too. One chapter, “Alone and Scared”, recounts his journey to polar bear country above the Arctic Circle.

Like Blackwell, Harris also weaves his childhood experiences into the narrative: growing up in public housing and, most importantly, being a Boy Scout.

‘Way Out There’ begs for a sequel – it covers less than a quarter of his travels, and Harris told me he had many journals chronicling his travels.

It’s appropriate, I suppose, that people wait until they’re well into their lives to write their autobiographies, but it’s impressive that these aren’t just the reflections of men reviewing their accomplishments. Rather, they are a summary of what they have accomplished so far.

Harris is 78 and still planning trips. Blackwell, 84, helped ‘Get Up Stand Up!’, a musical about the life of Bob Marley, which opened in London last year. He writes: “I always said I would live to be 94… Now that I’m 84, 94 seems to be getting a bit closer… I don’t mean to be greedy, but my mother lived to ‘at 104 years old.”